For the first time Xiphea performed at the german capitol Berlin. The norwegian band “Cretura” invited us to support their Berlin show and of course we took the chance to do a show at Berlin. We had a great time at the Rock and Metal Bar Blackland in Berlin. Four bands, a lot of metalheads and great shows. “Vargrimm” from Berlin started the night with a great performance and heated up the stage. “Fairy” from Norway rocked the stage as second and did a great job. Meanwhile we did a small Interview with some norwegian guys for a metal platform in Norway and their You Tube Channel. We will post the link to the video when it´s published.  After a small pause between “Fairy” and “Xiphea”. Sabine, Neil, Frank and Michael entered the stage and again Michael had to fill in for Bence on the drums. Like in Brno Michi did a wonderful job and we had a great time on stage in Berlin. Thank you very much everyone for your support.

“Cretura” finished the evening and performed a wonderful show. So we all had a great time, met wonderful people and had a chat or two with fans and friends. Thank you Berlin, we hope to see you all again soon. 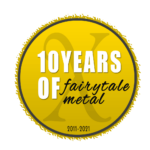